Retirement Planning with Today’s Perspective
When Can I Retire? 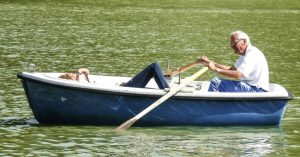 When can I retire?

This is one of the questions that I am asked most by clients on retirement planning. It would be nice if there were a single answer to such a seemingly simple concept; unfortunately, the answer is as diversified as are the individuals asking and the influences on that decision just as mixed.

Perhaps in Canada over the last 30 or 40 years, the strongest inputs on when retirement should be, have been government policy that has favored the age of 65. And to some degree, successful commercialism that was first promoted by London Life in 1989 with their classic Freedom 55 sales promotion. The creation of expectation. The government needed a set standard on which to base social policy and economic decisions and the insurance company, among many financial firms, wanted as much money as possible funneled into their investment products.

Unfortunately for most people, the notion of retiring at 55 has been more of a dream than a reality. Even London Life has repositioned themselves as those ages are now either unobtainable or irrelevant in an environment where perspectives are changing. An Ipsos Reid survey conducted in 2010 suggested that only 28 percent of respondents expected to obtain this Freedom by age 66. The other 72 percent are apparently reassessing their situations or are just no longer opting to retire as they have not accumulated adequate resources to fund retirement.

However for many potential retirees, the concept of retirement may be one of the by-products of the 20th-century industrialization process that in the larger scheme of things, only doesn’t fit the realities of today’s society. Traditionally, retirement, particularly for baby boomers, meant that after a period of working and asset accumulation lasting until the arbitrary age of 65 or 55 if you bought into the Freedom 55 scenario, an individual could then stop work and live off the proceeds of their assets and pensions. The perceived and promoted view of life after retirement was golf, time at the cottage and quality interaction with grandkids, family, and friends. The general theme was relaxed bliss with perhaps some time to travel the world, spend the winters down south or take up new hobbies. It is no wonder the term golden years held so much comfort for those who had spent years often working at labor intensive careers.

However, some factors are occurring that are making this whole view of retirement a little less compelling or even viable. First and foremost, people are living longer. When the government introduced the age of 65 as the threshold for receiving benefits in 1965, the average life span of a man was 62 with men being the predominant gender in the workforce. Consequently, those wanting to collect any benefits had to outlive that average age by at least three years. Today life expectancy has ballooned to 80.7 years for men and slightly more for women with women now taking up a vastly increased percentage of those in the workforce. Two-income families have also become the norm whereas, in 1965, the majority of women were relegated to the home.

Today people are living past these old expectations and are being productive much longer. Age 65 is no longer considered old, and in many cases, doesn’t even vaguely represent the ability of a person to function as a valued employee, company owner or new entrepreneur. There are an increasing number of people over 65 still working very productively and collecting their pensions. There are also many more of these individuals running viable companies or in some cases, starting new enterprises. In fact, Canada’s workforce is aging, creating a potential labor shortage of skilled and experienced workers. These potential retirees may experience an increased demand for their services.

If a person has their health, there are several good reasons to carry on working. A workplace is a social venue with developed personal relationships and consistent expectations. For many people, loss of this environment is an unnecessary change in personal status and wellbeing. But perhaps even more important, there are economic costs. Retirement initiates the draw on resources and assets. Each extra year of work gives the potential of more savings from income and allows more growth of existing savings. Working also delays the onset of retirement expenses. Another consideration is the nature of the actual work being done. In 1965, work was predominately manual. Today work is more knowledge-based and service oriented.

In both cases, this is much easier on the health of the individuals involved and puts more value on experience. For many, the reasons to retire are diminishing, and it appears many of these potential retirees will not formally withdraw from the workforce and may opt to work a little less or take up new vocations.

Obviously, this discussion might be enlightening and provide some perspectives, but it will not provide a definitive answer to the original question of When can I retire? As always, a thorough examination of the options and resources available for retirement planning to each or family grouping is recommended.

What’s your experience with retirement planning? Love to hear your story, let us know in the comment section below.

Want to join the discussion?
Feel free to contribute!

Feeling stuck or confused and looking for easy to understand answers?

Your Referrals Are Truly Appreciated

The Problem With Canadian Financial Advisers
Scroll to top